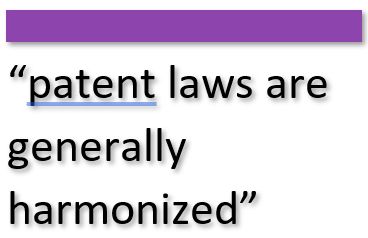 The patent laws around the world are generally reasonably harmonized. However, different examiners will interpret the language used in your patent specification, and in particular the claims, potentially in slightly different ways depending on the territory involved.

When working to protect a new development, it is therefore extremely important to understand the commercial hopes and expectations for the product, not only in your home territory, but also in the product or system’s likely overseas markets. In that way, when the patent specification is being written, the idiosyncrasies of the various jurisdictions can be taken into account at the outset and proactively planned for, rather than leaving it to luck downstream during prosecution.

The USA is always likely to be a significant market for nearly every patentee. It also has a well-developed and constantly evolving patent law, which includes guidance for examiners. Such guidance is useful to occasionally review to be reminded about the type of issues that the patent examiners’ are on the lookout for.

What is meant by ‘functional claim language’? How is this interpreted? And how can this type of objection be avoided during examination of your patent application? 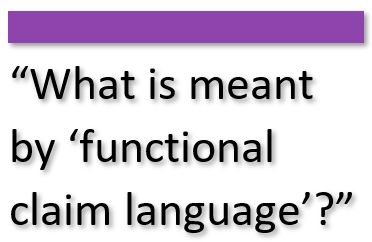 Three examples of claims that were contested now follow. The highlighted portions are the parts that were focused on by the courts:

Claim 24: A new composition of matter, transparent to infrared rays and resistant to thermal shock, the same being a solidified melt of two components present in proportion approximately eutectic, one of said components being BaF2 and the other being CaF2.

Claim 1: A method for conducting a drilling operation in a subterranean formation using a fragile gel drilling fluid comprising:

In the first example …

In the first example above:

This claim addresses the use of Carbon Black in vehicle tyres, and the fact that in its original form, Carbon Black is a fine dust (not ideal for your car’s tyres!). However, you cannot make it too hard and dense, if it is to be used as a component for manufacturing rubber and other somewhat pliable materials.

Taking the parts of the first example claim above in turn:

What does ‘substantially pure’ mean? The Court held that, in the context of the patent document, this refers to ‘freedom from binders’. In other words, a loose or granular material.

What does ‘commercially uniform’ mean? This was held to be defined as the degree of uniformity required by buyers of the product.

What does ‘comparatively small’ actually mean? No basis or standard for the comparison was given, and therefore this term was held to be meaningless in the context of the patent.

What does ‘spongy or porous’ mean? These were held as synonymous functional terms relating to ‘the density and gas content of aggregates of Carbon Black’.

Focusing on the final question regarding ‘spongy or porous’, since these terms equate to the density and gas content, then the degree of these characteristics needs to be explained or defined in order to achieve the claimed invention (in other words, how much sponginess or porosity do you actually need for the invention to work commercially?).

The Court stated that: ‘An invention must be capable of accurate definition, and it must be accurately defined, to be patentable.’ 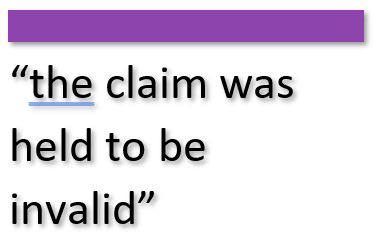 Because the degree of the sponginess or porosity was not defined, it was not clearly separated from other products already on the market. As such, for at least that reason, indefinite patent language was used, and the claim was held to be invalid (in other words, the claim lacked the required definition).

In the second example …

In the second example above, the Court delved into what ‘transparent to infrared rays’ actually meant.

As a reminder, this claim recited:

‘A new composition of matter, transparent to infrared rays and resistant to thermal shock, the same being a solidified melt of two components present in proportion approximately eutectic, one of said components being BaF2 and the other being CaF2.’

As you can appreciate from the first example, the Court needs to be convinced that there is a defined technical parameter in place to support the terminology used in the claim.

In this situation, the Court turned to the record on file. This may be the patent specification itself and/or the prosecution file detailing the arguments and counter-arguments between the patent applicant and the patent examiner. From the record, the Court was satisfied that earlier compositions prior to the filing of the patent application were all mainly opaque. To this end, the term in the claim ‘transparent to infrared rays’ was generally accurate in all cases covered by the patent filing.

Additionally, the Court was satisfied that the patent specification, and in particular the figures, detailed the variance in the degree of transparency based on the physical characteristics of the crystals used to make the composition. Such detail goes a long way in supporting the broader technical language being used in any claim, and this was also the case in this instance.

To this end, the Court found that the term ‘transparent to infrared rays’ was not indefinite. In other words, this broad claim was allowable and the particular phrase was not considered to constitute indefinite patent language.

In the third example …

Turning now to the third example above, the criteria discussed in relation to the previous two examples is also utilised here.

Again, as a quick reminder, this claim states (with the phrase that the Court focussed on in bold):

‘A method for conducting a drilling operation in a subterranean formation using a fragile gel drilling fluid comprising: an invert emulsion base; one or more thinners; one or more emulsifiers; and one or more weighting agents, wherein said operation includes running casing in a borehole.’

The Court analysed the meaning of ‘fragile gel’ in the novel process claimed for a drilling operation in a subterranean formation.

The fragile gel is required to: 1) turn from gel to a liquid during use, and 2) is required to have some strength or density sufficient to suspend drill cuttings.

Additionally, during prosecution, the claims were also specifically limited to a ‘fragile gel’ in order to separate them from prior art documents raised by the patent examiner. Consequently, if the term ‘fragile gel’ was held to be ‘indefinite’, then this would invalidate all of the associated claims.

The Court argued that the first functional definition of the fragile gel, namely the ability to turn from gel to liquid, was not technically defined in the patent specification nor was it clearly understood by the term ‘fragile’. The person of ordinary skill would not be able to determine the speed or quickness that the gel should turn to a liquid when a force was applied, nor how quickly it should transition back to a gel when the force was removed.

When considering the second functional definition, namely the ability to suspend drill cuttings, the Court could also not determine any technical parameters which identified the degree that would make this gel sufficiently viable for use in the field.

The term ‘fragile gel’ was therefore held to be indefinite patent language due to the lack of clarity in the degree of the ‘fragileness’. The claim was thus invalid.

When using a functional term to better describe a noun (in other words, spongy or porous interior; transparent to infrared rays; fragile gel), then unless the functional term encompasses every physical characteristic of the noun (in other words, all levels of sponginess or porosity; all degrees of transparency; all levels of fragility), it is prudent to include technical detail to support the terms. The technical detail may be in the form of ranges, ratios, percentages and the like, and these parameters could at the outset be placed in dependent or sub claims.

It does need to be borne in mind that the above specifically relates to the USA and prosecution before the USPTO. When drafting any patent application, consideration should be given to the patent owner’s other commercial markets. If a main or independent claim is filed in the USA with specific limitations to ranges, ratios or percentages, then although this may be beneficial when dealing with indefiniteness issues, it may not be required for the counterpart patent applications in Europe, Australia, China, and so on. You do not want to unintentionally limit your scope of protection in other markets where such functional terms may be perfectly acceptable without further clarification or limitation.

One strategy is to progress at the outset with a broader claim to begin with in the patent applicant’s various jurisdictions including such functional language, but with back-up positions crystalized or considered in readiness for downstream prosecution based on the peculiarities of the laws in the different territories.