A few observations about non-fungible tokens and blockchains 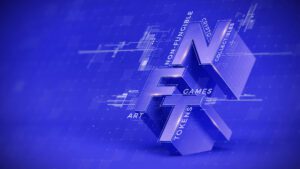 There has certainly been a lot of discussion about non-fungible tokens (NFTs) over the past couple of years. It’s hard to find an IP blog which hasn’t posted on the topic… everyone seems to suspect that NFTs might have “something” to do with intellectual property, though at times it has been hard to work out exactly what that something might be.

Here are just a few of my observations on this big subject.

What do we actually mean when we say an NFT is non-fungible?

Non-fungibility is obviously nothing new as such. Perhaps not enough attention is given to what the term actually means in the context of these tokens. According to Wikipedia fungibility is the property of a good or a commodity whose individual units are interchangeable and indistinguishable. But is that right? In my wallet is an example of what is normally thought of as the exemplar of a fungible good – money. Specifically I have a five-pound note. Yes it is interchangeable with all the other five-pound notes in circulation, but is it indistinguishable from them? No, because printed on the five-pound note is a serial number, and if the Bank of England have done their job properly then I have the only five-pound note in the universe with that particular serial number.

So I propose there are two meanings of “non-fungible” which are in use. It is quite important not to confuse the two. What I will call “technical” non-fungibility is the property that units can be distinguished – i.e. there is a difference. What might be termed “economic” non-fungibility is the property that units are not economically or contractually interchangeable – i.e. people care about the difference (which people? Of course, I may care and you may not…).

So non-fungibility of tokens on the blockchain is, or was, interesting because previously cryptocurrency coins on blockchains were fungible in the technical sense. NFTs are non-fungible in that they are unique tokens on the blockchain… just like my five-pound note! But how much that matters will depend on who cares about this particular uniqueness – whether particular tokens are economically non-fungible (a question which only arises if they have any value at all) is a question about what humans think, not a question of technology.

A secure decentralised ledger is all very well, but it isn’t the only thing the world needs

The key point about a blockchain ledger is that nobody is in charge – the ledger is distributed across the network and a consensus mechanism ensures that the integrity of the transaction record is maintained. Generally speaking, blockchain technology seems to have proved itself in the sense that it has satisfied that promise. But amongst the hype it often seems to be forgotten what the promise actually was.

Bitcoin, like gold, seems to be popular among those who are inclined to be suspicious of authority. It’s birth, apparently, was a response to the failure of banks and subsequent quantitative easing of 2008. Don’t trust central banks – they’ll devalue your money by printing more of it. That was the rallying cry. But many of us believe there is value in these institutions. Whether you think that it is a problem that the Bank of England is able to print money probably depends a lot on whether you agree with its monetary policy. But even if you happen to disagree with it sometimes, you might accept that there is value in an institution having a level of independence from government, with the ability to intervene in this way.

Often proposed uses of blockchain seem to adopt it as if it were the only trustworthy way of recording transactions. When proposed as a direct replacement for a current centralised system, the roles of the centralised authority other than that of simply keeping a ledger often seems to be forgotten. Could we ditch the UKIPO’s trade marks department and replace it with a decentralised ledger to prove who had registered what and when? (see my comment on “Band Name Vault” back in 2016) Of course we could. But that would mean getting rid of any human scrutiny of applications to ensure that marks registered are capable of distinguishing, and any human decision-making in a case where a registration in bad faith is alleged, and any human evaluation of a likelihood of confusion, and I could go on. Sure, we could say that A registered such-and-such a mark before B, but in the context of a working trade mark system which at least tries to be fair, that is only a tiny part of the story. UKIPO examiners, hearing officers and judges may sometimes get things wrong (meaning I disagree with their decision!), but does that mean we should stop them making decisions altogether? Surely not. Sometimes, a transaction ledger controlled by an authority with the ability to make decisions about changes to the ledger is just exactly the thing we need.

It is also important to recognise that the security properties of blockchain only extend as far as the edges of the blockchain. Interfaces with the real world tend to require more traditional measures. For example, we may accept that an NFT of a famous photograph, minted by the subject of that photograph has some value perhaps akin to a photograph with an original written autograph of the subject, or an original print made by the photographer. But how do we know that the person minting that NFT really is the person in the photograph? If the value is real then we need to know that it was, thus while the blockchain may be very good at tracking ownership of the token once it exists, for the important link to the real person we are going to want some other evidence at the point of creation.

One thing which has already turned out to be a real IP issue is the extent to which minting NFTs associated somehow with someone else’s brand is an infringement of trade mark rights. Nike and Hermès are just two of the best-known brands to have already launched trade mark infringement claims over NFTs – there are surely plenty of others to come.

In a way these cases are interesting because they will probably turn on how consumers see and understand NFTs in the marketplace, and the extent to which the value in the NFT is really the value in the associated brand. And is there an “NFT market” at all? Or is there a market for NFTs of trainers which is adjacent the trainer market and a market for NFTs of handbags which is adjacent the handbag market? Is the NFT of Disaster Girl in the same market as the NFT of Jack Dorsey’s first tweet?

In my mind the idea that one of these cases will set a legal precedent determining in general what you can and can’t do with NFTs is a bit premature. The cases will be decided according to the existing principles of trade mark law, applied to the facts found which will include facts about what average consumers think in this market, or in one of these markets. A “law of NFTs” is probably not necessary, and not desirable.

To sum up, I am more than a little sceptical of some of the hype around NFTs and blockchain. That doesn’t mean there is nothing in them at all but it is important to always keep in mind what is really new and different about them, and to remember that like any technology, there is only value to the extent that they solve problems which humans really have.