Morrisons and Morrisinghs: a pragmatic approach to Trade Mark infringement 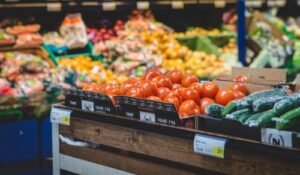 In 2012, a shopkeeper, Jel Singh Nagra, decided to name his small convenience store ‘Singhbury’s’, setting the name against a bright orange colour scheme. The ‘Singhbury’s’ sign and associated colour scheme appeared eerily familiar, and perhaps, unsurprisingly the proprietor of ‘Singhbury’s’ received a cease and desist letter from Sainsbury’s. The established superstore owner, were asserting their rights, threatening infringement proceedings, and demanding that the convenience store change its name.

It does not take much of an imaginative leap to spot the similarities in the branding, and the concerns that this raised for Sainsbury’s. The link between ‘Sainsbury’s’ and ‘Singhburys’, appeared to be a deliberate play on words, or parody of the well-known multinational brand, with the sign Singhbury’s representing a deliberate nod to Sainsburys, and its associated colour scheme.

Foremost, there is no parody exception under UK Trade Mark law, and the claim of infringement could have been upheld if pursued, resulting in the shopkeeper taking down his new sign, seemingly bringing an end to the matter.

A quote often attributed to Albert Einstein is that the definition of insanity is: ‘doing the same thing over and over again and expecting different results.’ While, this may be true that if you eliminate all the variables, this approximation is not possible in either the law or in real life. Therefore, the little Shopkeeper from Tyneside would try again, hoping for a different result.

Five years later in 2017, the shopkeeper, seeking to continue his imitation game, found an alternative target. This time renaming his convenience store ‘Morrisinghs’ after ‘Morrisons’, and making use of the familiar red ‘M’. Morrisons has purportedly taken the ‘joke’ in better humour than Sainsburys and has no plans to challenge the use of the ‘Morrisinghs’ sign. 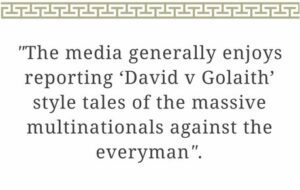 The difference between the reactions of the two supermarkets is notable. Morrisons foresaw that a heavy-handed action against the small Tyneside shop would be a public relations powder keg, and opted instead, to generate goodwill, by being the ‘nice supermarket’. The media generally enjoys reporting ‘David v Golaith’ style tales of the massive multinationals against the everyman, and these reports often have very little regard of the actual law. If a different approach had been taken, the use of the sign ‘Morrisinghs’ is in all likelihood tantamount to infringement of the Morrisons Mark, and the supermarket could have opted to enforce their rights.

It is down to the individual preferences of any company or rights holder to decide how to enforce their trade mark rights; there is no obligation for a trade mark holder to approach every potential case of infringement as a potential legal battle. Here at Albright IP, we offer realistic and commercial advice about how to approach a potential trade mark infringement, in a manner which assures the best result.