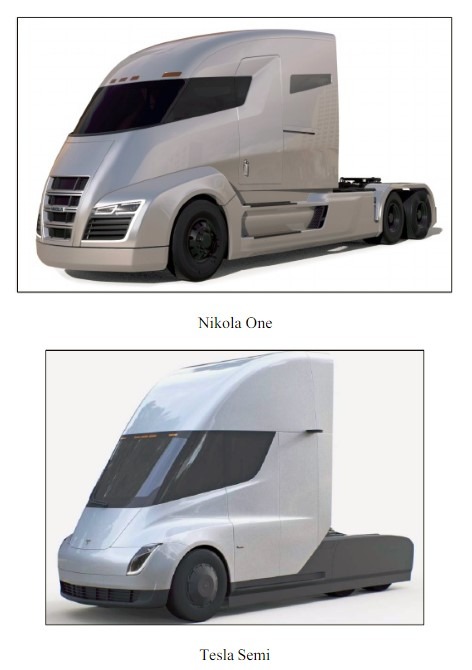 Trucking start-up company Nikola have sued Tesla for $2 billion, alleging that Tesla have infringed their US design patents for an alternative fuel truck.

Nikola is a start-up company founded by self-described serial entrepreneur Trevor Milton, aiming to be the Tesla of the trucking industry. The comparison to Tesla Motors is one the company welcomes, naming itself after the same Serbian physicist, Nikola Tesla.

On 1 December 2016, Nikola unveiled a hydrogen electric truck prototype, the Nikola 1. Since then, pre-orders worth over $6.5 billion have been placed, according to the company website.

On 16 November 2017, Tesla unveiled its own electric truck, the Semi, causing the company’s market value to jump over $2 billion.

Nikola claim that Tesla’s truck infringes three of their US design patents. A design patent protects the appearance of a product, particularly its shape, orientation and surface decoration. Nikola own several design patents which protect different aspects of the Nikola 1 design. One protects the silhouette of the cab, one the wraparound windshield, and one the shape and position of the side door on the cab.

Comparing the Tesla Semi and the Nikola 1 side by side does reveal some similarity, but is it close enough to infringe the patents? To answer this question, the judge will need to understand the ‘state of the art’ in truck design. If the features Nikola rely on, i.e. the cab shape, wraparound windshield and side door, were already well known, then Tesla isn’t infringing Nikola’s designs by using them.