How does Apple successfully patent software? 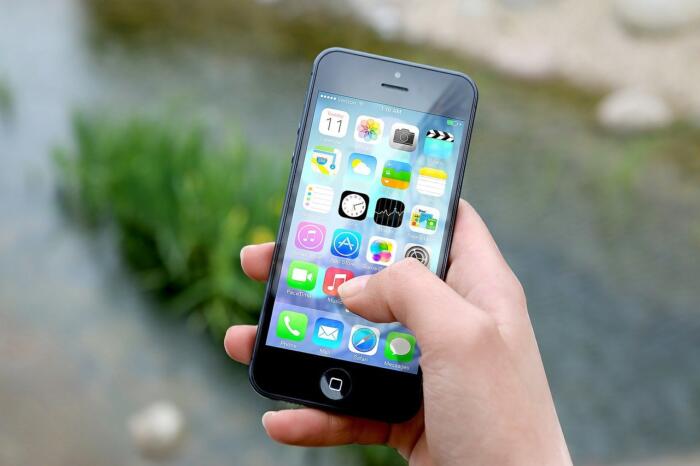 Having handled patent cases for more than 20 years, I have lost count of the number of times clients have asked “How do I patent software?”, or state that “Software is not patentable in the UK or Europe”.

My answer has always been, that although this area of patent law is generally more difficult and complex, it is certainly not impossible to obtain granted software patents.

Once the client stops looking perplexed, I have to then explain the initial strategic thought process to allow us to be successful when patenting software. This takes a reasonable amount of time, which led me to the conclusion that I needed to write this series of brief case studies which examine how to successfully patent software.

Apple Inc is a massive brand, known around the world. Not only do they develop amazing hardware and have fantastic designs, they obtain large numbers of granted patents almost daily. Many of those grants relate to software patents.

Each article in this short series dissects a granted patent issued to Apple Inc to guide you as to how we can successfully patent software in at least Europe.

The first Apple software patent that we will examine is EP3435240.

Where to Find Software Patents?

Software patents are generally located under the broad classification code of G06F.

G06N is also referred and is described as: COMPUTER SYSTEMS BASED ON SPECIFIC COMPUTATIONAL MODELS.

There are many sub-categories within both of these classifications, and by just looking in these categories alone, many granted software patents can be reviewed.

Apple’s European patent EP3435240 has an Abstract which reads (bolding added for emphasis):

Essentially, this is movement and manipulation of data. In other words, it’s software!

However, the Abstract is written to convey ‘hardware’ type language. The Abstract is the first statement that the Examiner reads. We need to make the Examiner think this is more than just software, to try and avoid him simply jumping to a conclusion that this is excluded matter.

What Patent Images will Help Obtain Grant of a Software Patent?

Figure 1 of the Apple patent which accompanies the Abstract shows the following: 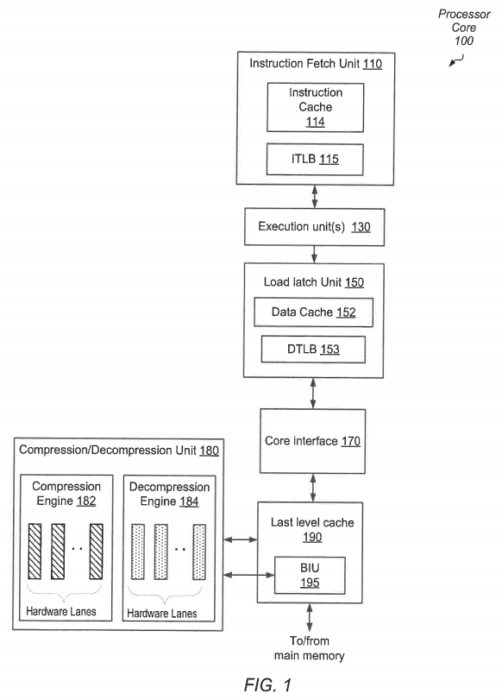 This kind of flow chart is extremely useful in conveying the technical attributes of the system. I do always encourage clients to provide such flow charts. Please do look at the other drawings in the Apple patent, there are fifteen pages altogether. All are useful in explaining to any patent examiner the movement and manipulation of the software data between ‘hardware’ type components within the backend processing architecture.

It is not necessary to have this many pages of images, but it does certainly help convince the patent office examiners that we have a clearly sufficient and enabling disclosure, thereby potentially aiding smoother prosecution.

How was Claim 1 Written to be Considered Patentable Matter?

Claim 1, in this case, was originally filed as follows: 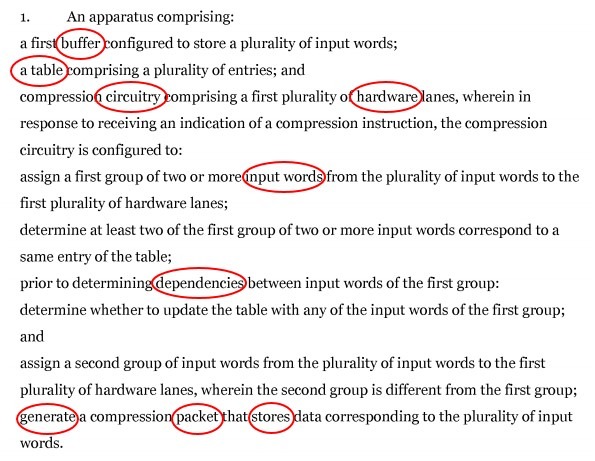 You can easily see that the language used is largely ‘technical’. Use of words such as ‘buffer’, ‘table’, ‘circuitry’, ‘hardware lanes’, ‘packet’ and ‘stores’, for example.

Under European patent law, the examiners will argue that the claimed material is not patentable if it is not ‘technical’ in nature. If the language is purely software related, then there is a strong chance that this first hurdle will not be overcome, the development will be considered ‘excluded matter’, and the application will thus be refused.

The second independent claim, namely claim 11, was written as a method: 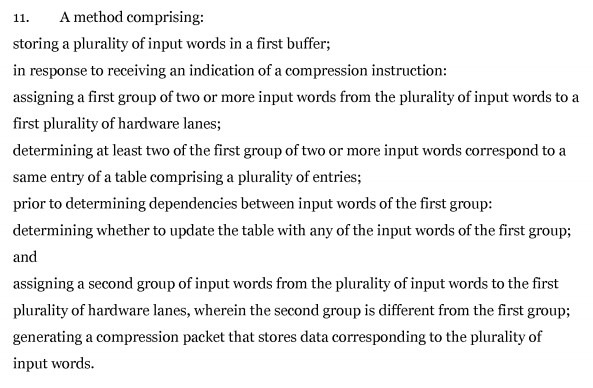 As you read the above claim, you will see that similar language has been used, including the use of ‘hardware lanes’. This again conveys technical language, and thus a lower likelihood of being found to be none patentable subject matter.

The third independent claim on filing was claim 15 going to a ‘system’: 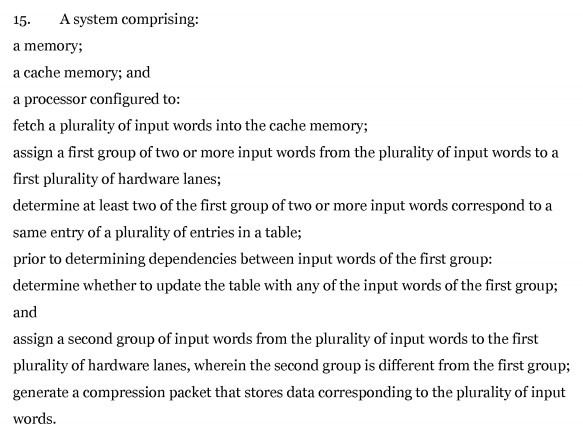 Similarly to the above comments, the examiner has no major issue with the patentability of this ‘system’.

The examiner did contend that the ‘apparatus’ claim 1 and the ‘system’ claim 15 were effectively two ‘apparatus’ claims covering the same matter. Claim 15 was thereby removed to easily overcome this objection.

Why was Claim 1 objected to?

With software patenting, once the first hurdle of ‘is it excluded subject matter?’ has been overcome, then prosecution is very much like any mechanical or electronics patent. The two hurdles that have to be overcome are ‘novelty’ and ‘inventive step’. In other words, is the claimed improvement unique and not obvious?

For this software patent for Apple, only one prior patent document was raised (US6879266B1) as having closely similar features to those of at least claims 1 and 11.

This is interesting. The examiner focuses on the feature ‘determining dependencies’ and argues that, although this is a distinguishing feature when considering US’266, because it is phrased in a non-technical way, it has to be ignored. To that end, claims 1 and 11 therefore have nothing else that separates them from US’266, and as such there is not a sufficient inventive step forward. The examiner therefore raises his objection against grant.

The patent examiners will often subtly point out potential areas that could be worked on to achieve grant.

For example, as outlined above, the examiner in this Apple application drew attention in item 3.3 of the examination report (snippet above) to what he considered to be the ‘distinguishing feature’. But, then explained why it was not suitably ‘technical’, and thus lacked inventive step.

Following removal of the ‘system’ claim 15, remaining independent claim 1 was amended as follows, with independent method claim 11 being similarly amended: 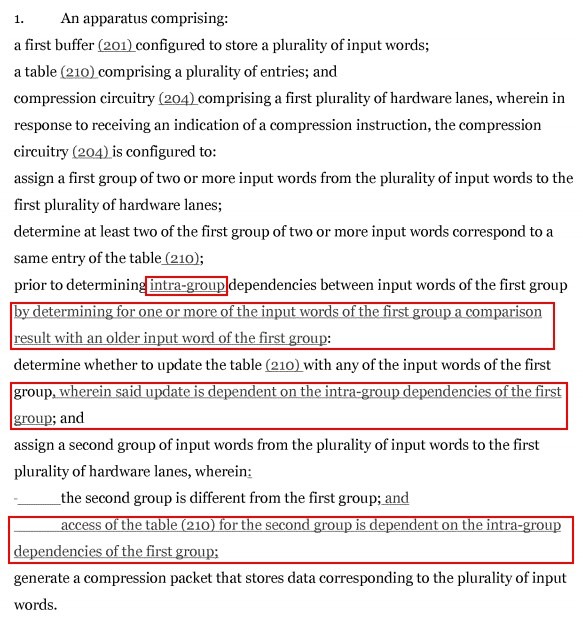 It is clear to see that the original phrase ‘determining dependencies’ was concentrated on. This was clarified by the inclusion from the patent specification of the term ‘intra-group’, as shown in the first red box above.

Once clarified, further ‘hardware’ type technical phrasing was utilised to explain that access of the table was based on the intra-group dependencies. This is akin to a ‘lock and key’, and as such conveys more of a ‘technical effect’. See the final red box above.

To back-up the submitted amendments and address the examiner’s lack of inventiveness concerns, a concise summary of the benefit of the improved system was provided to the examiner: 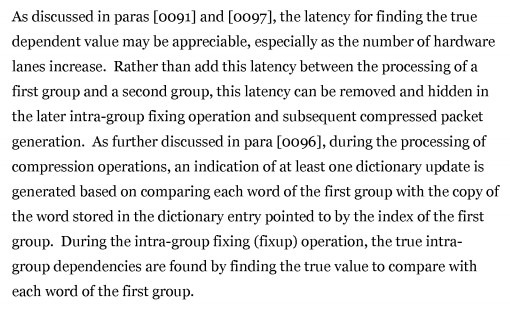 The examiner accepted this clarification of the distinguishing feature, and agreed that it differentiated sufficiently over the prior art patent. He thus accepted that a ‘technical problem’ was being solved, also accepted therefore that the novelty and inventive step hurdles were overcome, and consequently allowed grant of the patent.