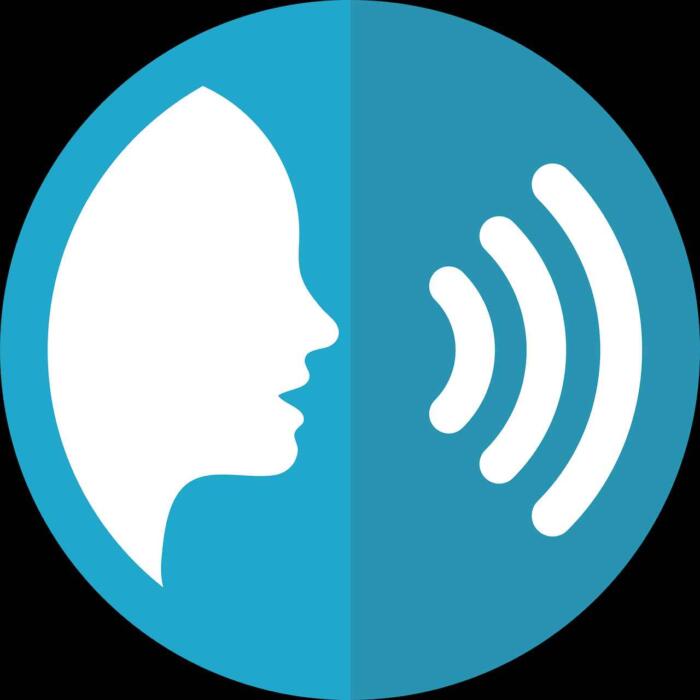 This third Software Patent Case Study follows on from my earlier First and Second Case Studies analysing how to patent software in Europe.

Below, we will dissect a recent European software patent awarded to Apple Inc which covers some of the specific functions of Apple’s Virtual Assistant, Siri® to see exactly how Apple got this patent allowed.

As with Amazon’s Alexa® and Google’s Assistant, the home speaker and virtual assistant market is likely to grow exponentially in the coming years. It will therefore become increasingly valuable as we become more connected and more reliant on this technology, which will improve with the faster network speeds of 5G and then 6G also becoming the norm.

Unsurprisingly, therefore, the tech-giants need to protect their development work, and patent protecting the operation of their individual virtual assistants is a priority.

As with the earlier articles in this Case Study series, it is a common misconception that ‘software’ cannot be patented in Europe. As with many technical developments, there are always likely to be hurdles to overcome, but knowing the general strategies that result in successful grant of software patents in Europe allows for consideration and review at the outset, along with a plan for success to be formulated.

So, let’s take a look at this recently granted European patent EP3453019, which Apple secured and which is titled: ‘Intelligent List Reading’.

Can you really patent protect ‘intelligent list reading’? The answer is yes!

As with the earlier patents analysed in this series of articles, this patent was classified in some of the ‘G06F’ classifications relating to ‘information retrieval; database structures therefor; file system structures therefor’, and ‘G10L’ classifications relating to ‘speech recognition’. See the following graphic from the front page of the patent:

If you are interested in looking at what else appears in these Classifications, see the following links – you will be amazed at what is being submitted, by which companies, and what is being granted.

Remember, ‘G06F’ is a broad Classification term, and we can drill down further into this Code to refine our searches (such as G06F3/16 or G06F16/33 as shown in the above graphic).

And now for G10L search examples:

WHAT PATENT IMAGES DO WE NEED?

This is a very common question, and Figure 1 in Apple’s EP’019 patent provides a nice example of what we need to show to the Patent Examiners. This first image provides a high-level overview of the possible system.

Do take particular note of the end user, shown at the bottom left, the user interface (referenced as 104, for example, a smartphone or tablet), and then a second user interface or second screen 122, both of which interface with a cloud computing network.

The cloud computing network then interfaces with the remote backend hardware and software architecture, shown in a broad block-diagram manner: 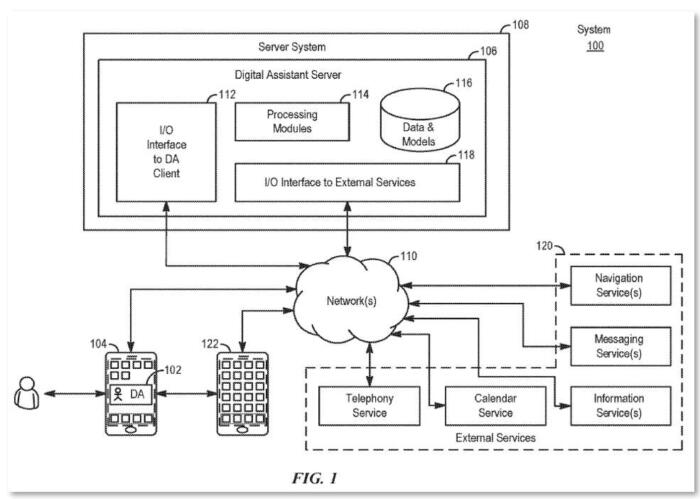 This type of Figure 1 diagram is a nice way to ease the Patent Examiner into the subject of the patent.

By showing the hardware items, we are aiming to convince the Examiner that the focus of the patent is not purely relating to ‘software’ alone, which may cause patentability issues due to software on its own being excluded under patent law.

Next, we have Figure 2A, shown below.

Although this Figure 2A looks complex, it is actually just showing you the iPhone® or similar device (user device 104 shown in Figure 1 above), and how the circuitry and processing modules communicate.

Again, we are easing the Examiner into the detail, and persuading her that this relates to ‘technical’ matter and not solely software: 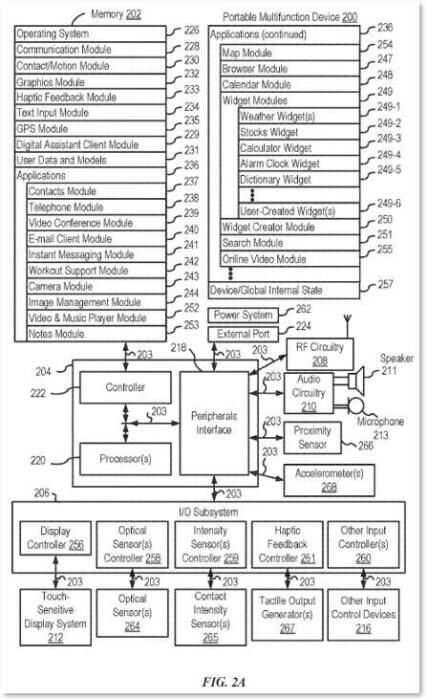 The subsequent drawings all follow the same idea. It is not until Figure 7A that ‘Siri’ the personal digital assistant is actually properly introduced as a generalised block diagram with ‘hardware’ type language – again trying to steer away from purely software terms: 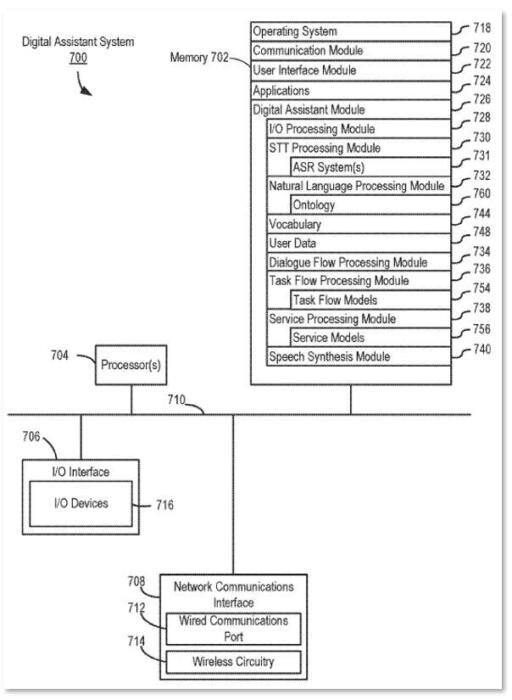 Figures 8A onwards then introduce the algorithmic processes, broken easily into generalised logic steps, which allow Siri to function:

And, wrapping it all up, Figures 9A onwards give the Examiner an ‘in use’ example of Siri in action, using the previously presented device, system, and algorithms: 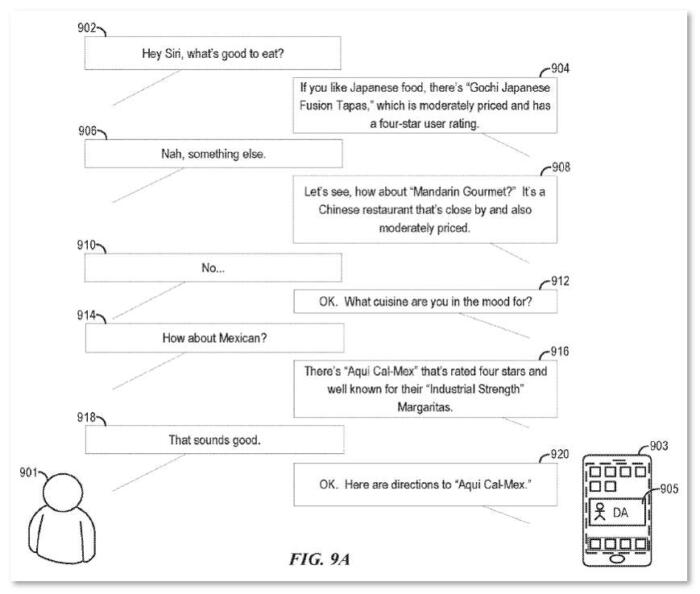 SUMMARY OF THE REQUIRED PATENT IMAGES

So, in summary, providing the Patent Examiner with the following general categories of patent diagrams in a ‘software’ patent is an excellent starting point:

THE FORMAT FOR ALLOWABLE SOFTWARE CLAIMS

To successfully patent software concepts in Europe, the general formula to start with is along the lines of:

Main Claim 1 – outline in technical language the methodology, algorithmic steps, and/or backend processes that are taking place by use of the software combined with the hardware infrastructure to achieve the end result;

Main Claim 3 – cover the hardware system itself which implements the Main Claim 1 methodology;

Lets now take a look at each of these Main Claims, as granted in Apple’s European software patent EP’019. 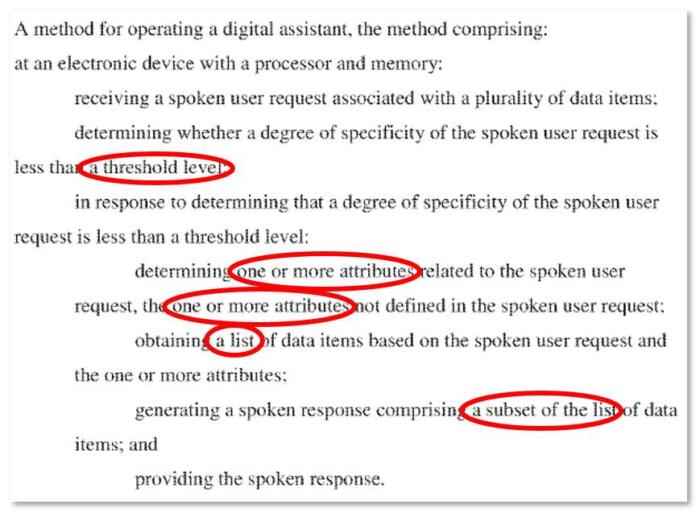 Main Claim 2, which in this EP’019 patent is numbered as claim 30, then covers the computer memory having code thereon to implement the method of Main Claim 1:

Main Claim 3, which in this case is numbered as claim 32, recites the overall ‘system’, having the hardware features, being processors, along with the memory of Main Claim 2 (claim 31 above):

Finally, Main Claim 4, which in this case is numbered as claim 34, covers an actual physical device, such as the iPhone®, having various hardware components which interact with each other in some form.

Note that the ‘processing unit’ in this Main Claim 4 (claim 34) is an item of hardware, but essentially repeats the algorithmic processing steps of Main Claim 1: 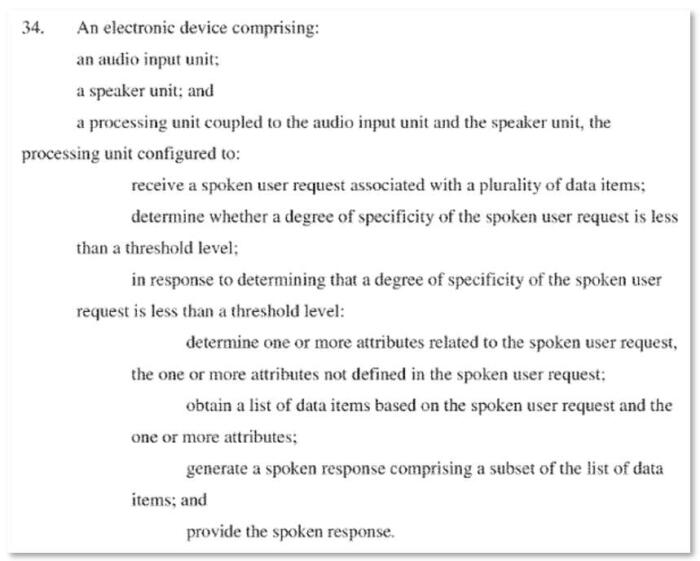 By submitting the Main Claims in these forms, the European Examiner had no issue accepting that the monopoly being requested was related to technical matter, and thus not solely excluded software matter. The first potentially problematic hurdle was overcome.

SUMMARY OF THE FORMAT FOR ALLOWABLE SOFTWARE CLAIMS

So, in summary, providing the Patent Examiner with the following general categories of patent claims in a ‘software’ patent is an excellent starting point:

WHAT HAPPENED DURING PATENT EXAMINATION?

Wrapping up this analysis, by Apple submitting its claim set in the above form allowed them to overcome the first of three hurdles to grant.

The first hurdle considered by any Patent Examiner is: ‘Is the subject matter excluded under the patent law?’

In Europe, one of these exclusions is if the ‘invention’ is purely software, then it is not technical, and thus is it not grantable as a patent.

The above claim language, using physical hardware type terminology conveys to the Examiner that the invention being claimed in more than only software. It is therefore seen as being technical in nature, and no objection is raised in terms of excluded subject matter.

The Examiner then moves on to the second and third hurdles to grant, which are novelty and inventive step.

For this EP’019 patent, the Examiner objected to the novelty (uniqueness) of the original claim language shown above in view of two earlier patent documents (US’274 and US’013).

Apple counter-argued along with submitting minor revisions, shown below (additions made by Apple shown underlined, deletions crossed through).

This satisfied the Examiner. It was accepted that there was a sufficient technical and cleverly unique distinction, and the patent was granted. 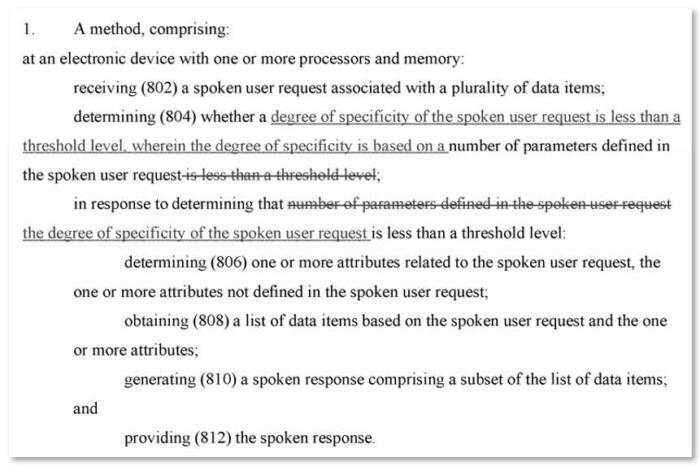 You will note that Apple decided to reduce the number of their claims during examination, and interestingly decided to remove their ‘system’ claim.

WRAPPING IT ALL UP

For successfully patenting software in Europe, focus on the following: